It was just six months ago that three venture capitalists, Trish, James and Palmer Higgins, took the biggest leap of their relatively young lives.

After a year researching 1,000 businesses, holding 75 conference calls and visiting prospects coast to coast, they made a decision. They would put their money — and their hearts — not into some cool Silicon Valley tech upstart or e-commerce innovator but into a snow removal and landscaping operation in Portland, Me.

And they said in an interview with The New York Times for an article about their plans that they would double down on the risk by moving to Maine from their home in Greenwich, Conn., even before the deal was done. They became co-owners of Seabreeze Property Services in September with the company’s founders, John and Pete Kelly.

So now, with a half-year and a comparatively mild winter behind them, how is it going? What might the difference be between expectations for a new business and the reality? The question is one new business owners face all the time.

“It’s easy to put together a grand strategy,” said Ms. Higgins, 30, who bought the business with her husband, James, 31, and his brother, Palmer, 28. “The big challenge is executing the day-to-day operation.”

While most people tend to think of start-ups as a way to be your own boss, an increasing number of people — some fresh out of business school and others looking for a second career — are buying small businesses, or buying into them.

The average price of such a business in 2015 was just under $200,000 according to BizBuySell.com, the largest small-business marketplace in North America, but 8 percent of its businesses sell for more than $1 million.

Such small business may not be as trendy as start-ups, but for many eager to be their own bosses, they can be more rewarding than working in the corporate world.

And they are less risky. According to the Small Business Administration, about half of all new businesses fail within five years.

The Small Business Administration has no specific numbers of success rates among buyers of operating small businesses. However, Natalia Olson-Urtecho, mid-Atlantic regional director of the agency, said they were probably much higher than among owners of start-ups, because most businesses will not find buyers if they are not viable.

“If you buy an existing successful business, it already has a client base,” said Ed Pendarvis, founder of Sunbelt Business Brokers, a company that brokers deals between small-business buyers and sellers.

Also, said Mr. Pendarvis, who founded Business Buyers University, a company that offers information on buying and owning a business, in a typical financing case, most sellers have a financial stake in the company they are selling for several years after the sale, so they have a vested interest in its continuing success.

If Entrepreneurship Through Acquisition, the class taught by Royce Yudkoff and Richard Ruback, professors at Harvard Business School, is any evidence, interest in small-business acquisition is growing rapidly. Five years ago, when they first offered the class, only a handful of students were interested. Last year 270 students took the course.

Small-business loans grew to $8 billion last year from $6 billion in 2014, Ms. Olson-Urtecho said, and many of them went to people buying operating companies. And the sale of small businesses grew by 53 percent from 2012 to 2015, according to BizBuySell.com, which now has more than 47,000 active listings.

The Higgins group invested between $5 million and $10 million in Seabreeze Property Services, but declined to disclose an exact price.

The Kellys, who have owned the business for 20 years, run the day-to-day operation, while the Higginses are developing an overarching expansion strategy.

The Kellys talked to dozens of people about a possible partnership over the years “to get to the next level,” Pete Kelly, 46, said. Then things clicked with the Higginses.

“This was a marriage,” John Kelly, 51, said. “If it wasn’t the right fit, we never would have partnered up.” 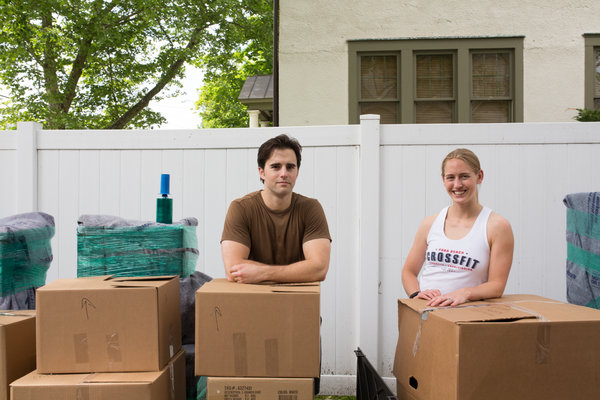 James and Trish Higgins moved to Maine to buy a small business. “It’s easy to put together a grand strategy,” Ms. Higgins said. “The big challenge is executing the day-to-day operation.”CreditChristopher Capozziello for The New York Times

And while the Kellys and Higginses speak enthusiastically of the partnership, even honeymoons have problems. For one thing, Seabreeze had no comprehensive database for properties it services.

“It may sound easy, but most of the work is in a very tight circle around Portland,” James Higgins said. “They kept track of properties via nicknames, and the senior people know what to do and have all the knowledge in their heads, so something as simple as an address isn’t written down. We’re plotting it out.”

Palmer Higgins said one of the first challenges was transferring a whiteboard system that specifies who is working on what property into a computerized system.

“I knew it would be a big project and, if done well, would be a huge boon, but it’s not a simple thing,” he said. “If you change this, you have to change that and this and this. It’s like pulling a string.”

So they have had to contain their eagerness to rush forward, and have postponed the new computer system.

Acquiring a business and keeping the original owners on as partners is less typical than taking over completely, and has its advantages and disadvantages.

“The positive is that you have someone deeply experienced in the business,” Professor Yudkoff said. But owners have “operated as entrepreneurs who are answerable to no one,” he said. “It can be hard to change that.”

Randy Shayler, who bought a musical instrument rental company in Reading, Pa., took over the entire ownership of the 93-year-old business, Zeswitz Music, three years ago. He was a management consultant before attending Harvard Business School, and thought he would probably run his own company later.

It was not until he took Entrepreneurship Through Acquisition that he realized it could be the next step in his career.

After looking at about 200 possibilities and seriously considering six, he settled on Zeswitz, which he bought for several million dollars, using a Small Business Administration loan and investments from the very people who inspired his decision, Professors Yudkoff and Ruback. They have invested in the businesses of eight former students.

Although the owner no longer helps run the company, “she is a great resource,” Mr. Shayler, 31, said, as is the highly experienced work force.

His business has grown significantly, he said, and he attributes that to spending several days a week doing sales calls at schools, and improving the quality of the instruments, their repairs and tracking the numbers.

“I know that 98 percent of repairs go back out in two weeks,” Mr. Shayler said. “I don’t think that was tracked before.”

Devin Mackoff, 30, like the Higginses, was featured in The Times article six months ago, right after he bought a landscaping company, Landscape Cod, on Cape Cod. He put $150,000 down and guaranteed the sellers about 10 percent of the revenue over the next three years. After a hectic summer, the winter gave him much-needed time to regroup.

He decided to shift his business more toward gardening and project work and away from landscape maintenance. After some employees left him in the lurch, he said he was seeking a better way to recruit and keep staff.

“We grew the business 10 percent last year, which is good, but I really needed the break to step back and say, ‘This is working and this isn’t.’ ” he said. “I need to have more people on deck rather than scrambling for them if someone just quits by text. I want people who want to work.”

Buying a small business, unlike creating a start-up, means inheriting someone else’s procedures, decisions and vision. And it may take a while not only to create a new vision, but also to determine the best way to get there.

“We realize that even if we know where we want to go,” Ms. Higgins said, “we still have to figure out the right pace.”

A version of this article originally appeared on NYTimes.

SCORE NYC is a volunteer team of experienced business mentors dedicated to providing insights and knowledge to small business owners and those wishing to start a business with. Our 70+ mentors represent a multitude of industries and business expertise. They have all enjoyed success in their careers and are committed to giving you the support, encouragement and tools needed to build and sustain...