Our annual 2016 Creative Trends Infographic is a fusion of data and design, showcasing the year’s biggest design trends from around the world. We know what’s trending, but we wanted to learn more about why and how these trends become popular. To kick off this project, we’re looking at the flat lay trend: the psychology behind its appeal, and its emergence at the intersection of fashion, food, and social media.

The Origins of Flat Lay

The first flat lay came about in 1987 in the form of knolling, an ingenious organization method first dreamed up by Andrew Kromelow, a janitor at the Frank Gehry furniture store. He picked up things he found lying around the store and arranged them on a flat surface at 90 degree angles. Knolling took off in 2009 when sculptor Tom Sachs adopted the art form and coined the phrase “ABK—Always Be Knolling.” Since then, knolling has spawned flat lay photography, which offers a looser approach to the general principle: objects organized on a flat surface. 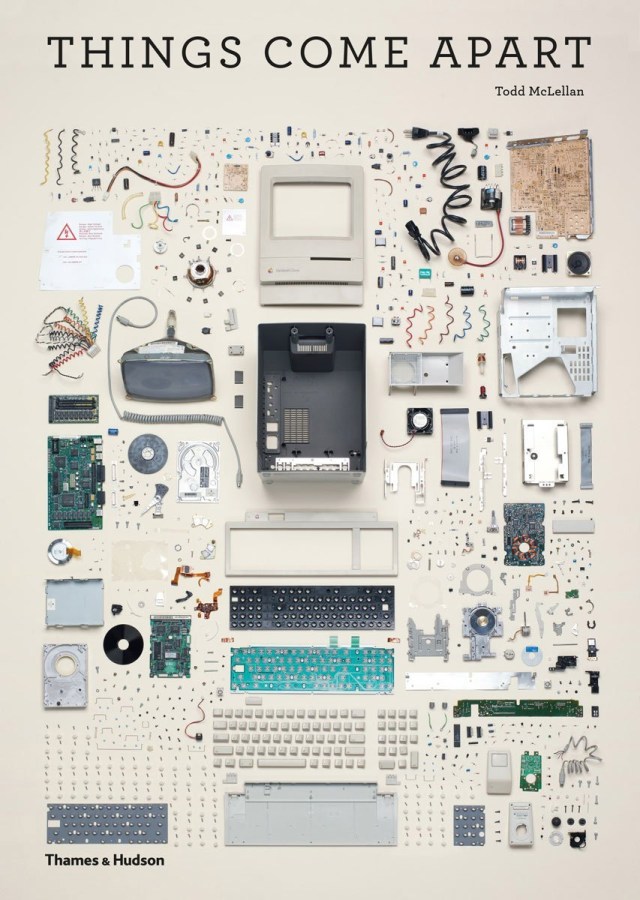 Why Is It Trending?

It’s no secret that humans love stuff. Like seagulls dive-bombing the sidewalk in pursuit of a shiny candy wrapper, we gravitate towards things. We all choose different things to have and to hold, whether it’s a stuffed animal from childhood or the next wearable tech device. And, whether or not you fall on the minimalist spectrum, it’s important to remember that our stuff has meaning; as French writer Antoine de Saint-Exupéry (author of The Little Prince) said, “The meaning of things lies not in the things themselves, but in our attitude toward them.”

While our love of stuff is built up (or torn down) gradually through social and cultural influences, our love of order is a function of our brain’s immense information processing abilities. From the time we are small children trying to fit a square peg into a round hole, we are learning to organize the slew of data that bombards us daily. Anything that can help us order information faster, like listsicles or a rainbow flat lay of objects found washed up on the beach, is like candy for our brains.

Long before Instagram, children everywhere learned to love a good flat lay with the world’s most perfect brain puzzle: the combination of things and order that is Scholastic’s I Spy. 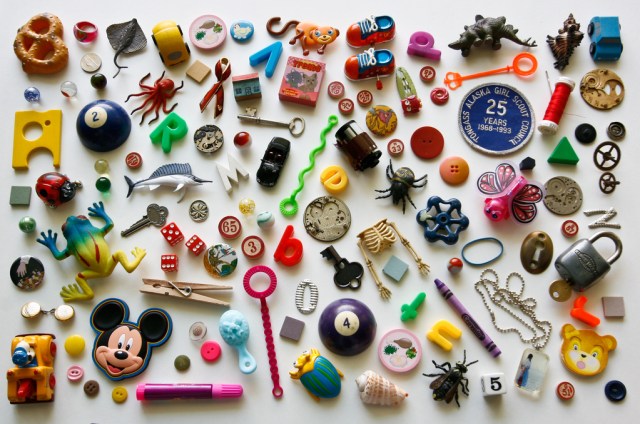 A recreation of the classic I Spy flat lay, taken by Flickr user Michelle.

In film, flat lay usually appears as an overhead shot, called Bird’s Eye View, a Top Shot, or God’s Eye View. This angle is popular in thrillers, where the overhead perspective registers the world in a weird, unsettling way and the wide shot increases the spatial unknown. Videographer Brian Carroll’s compilation of overhead shots is evidence of the cinematic power of God’s Eye View.

The true form of flat lay, involving carefully assembled objects, would be rare in cinematography were it not for master of detail, Wes Anderson. While most films use the overhead shot to track a character or show a landscape, Anderson uses it to share thesmall, intimate moments of a character’s routine where objects are the main focus.

Flat lay got a big Hollywood shout-out at the 2015 Oscars when graphic designer Henry Hobson created flat lay representations for each of the five films nominated in the Production Design category. These tactile pieces show that the heart and spirit of a film can indeed be captured with objects neatly organized on a flat surface. 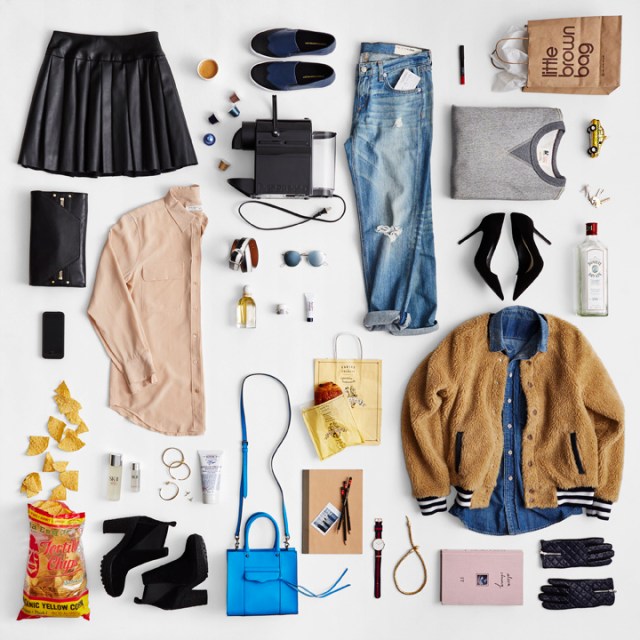 With e-commerce already a behemoth part of the retail industry, retailers have been pressed find new ways to engage customers online. Enter flat lay, which lets stylists communicate the look of a collection with simple, fresh photography. That feeling of pure, organization-induced glee that you may feel upon encountering a table full of colored-coded, perfectly folded t-shirts can also be accomplished with a stunning flat lay on Instagram—without the hassle of refolding. With the goal of making online shopping more tangible, flat lay has become an indispensable method. This is especially true on image-based platforms, which allow users to see and share products as a form of social currency. Pinterestengages consumers by bringing objects to life in personalized style portfolios and mood boards. Online outfit curatorPolyvore, first launched in 2007, has allowed users to create millions of style collages with a streak of the flat lay look running throughout. 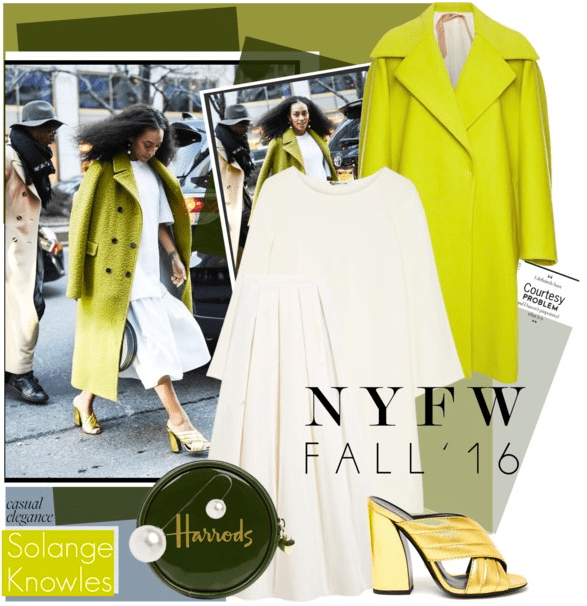 This fashion mood board by Polyvore user bugatti-veyron shows flat lay’s power as a tool for online shopping and outfit inspiration.

The flat lay shot has been flourishing in fashion editorial for some time, but the trend has been canonized by fashion bloggers. Online fashion icon Jane Aldridge (Sea of Shoes) has perfected the Polyvore-inspired product shot, while lifestyle/fashion/design blogger Bri Emery takes the trend beyond outfits to display an array of beautiful things on herInstagram and blog. 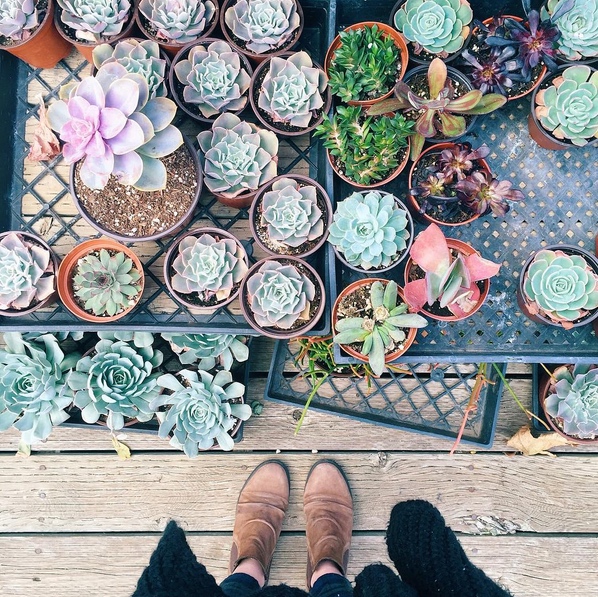 Bri Emery of Designlovefest goes beyond the confines of fashion’s #ootd to show that flat lay is not just a trend–it’s a lifestyle.

This century has seen an upheaval in the way we buy, prepare, eat, and think about food; flat lay has become the composition of choice for marking these changes. A major industry trend is the farm-to-table movement, which has reclaimed the food narrative to focus on fresh, locally-sourced ingredients. Ingredients are the impetus behind the movement, so they are heavily represented in contemporary food photography. What better way to represent the parts that make up the whole meal than with the segmented style of flat lay photography?

Photographer and blogger Eva Kosmas Flores puts fresh, colorful ingredients in the limelight as part of the farm-to-table movement.

There’s also the explosion of food blogs, which have put the power of gorgeous food photography into the hands of amateur chefs. Flat lay shots are the king of the blogosphere, where they elevate even the most basic recipe, making every meal look artisanal. You don’t need to venture far into the food blogosphere to find flat lay, but a few have food styling that stands apart: Joy the Baker’s divine bakes take on new sophistication with flat lay styling, while Jessica Merchant of How Sweet It Is elevates down-to-earth-recipes with a refined flare. 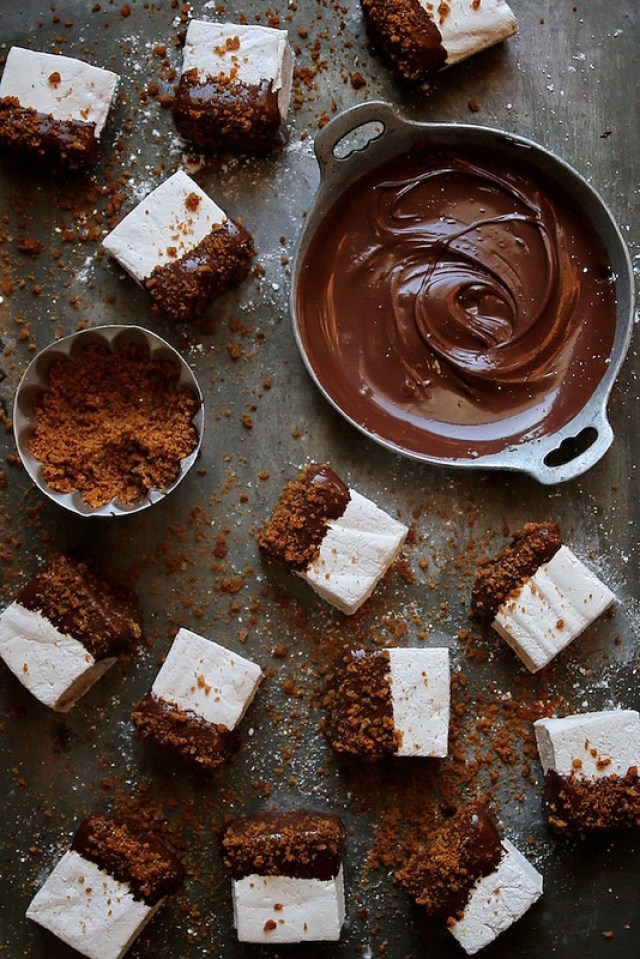 In the age of the iPhone, many food bloggers are taking stunning food photographs with the most basic equipment. In fact, food magazine Bon Apetit knows the power of an iPhone flat lay food photo so well that their entire March issue is comprised of the stuff.

Even Buzzfeed, the compendium of internet goings-on, is breaking into the flat lay game, combining it with footage to create short, snappy recipe videos. Their Tasty series has exploded on social media, drumming up almost 40 million page likes on their Facebook alone.

Flat lay has reached the apex of trendiness with help from social media — in particular, Instagram. The photo sharing platform has an abundance of photos documenting the flat side of toast, fall foliage, camera equipment, the contents of various women’s’ handbags, and more. Instagram is the perfect platform for this trend, allowing us to share and to satisfy our love of stuff and order in one non-stop feed. The account@flatlays curates some of the best compositions, but some heavyweights have garnered a following all their own for their on-point flat lay photos, like @margaret_zhang,@thepaperbunny, @taramilktea, and @fashionpastry. 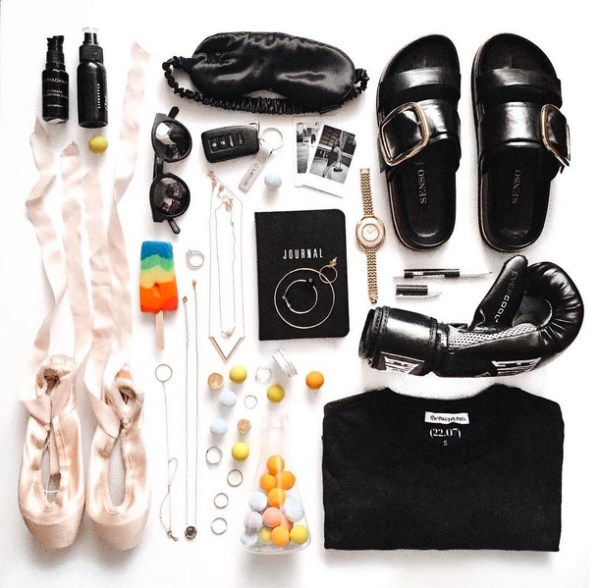 @margaret_zhang has become synonymous with flat lay on Instagram, creating compelling shoots that sometimes place opposites on the same plane, as in this photo, which features black leather boxing gloves next to soft pink ballet slippers. 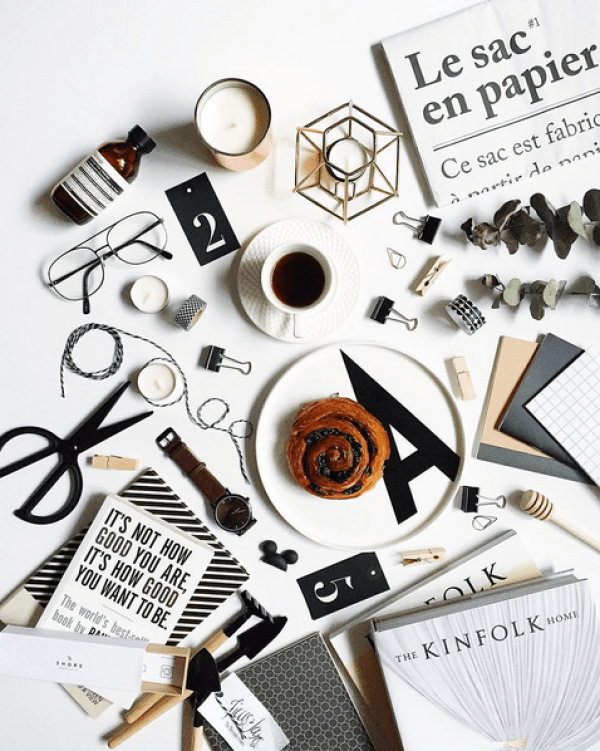 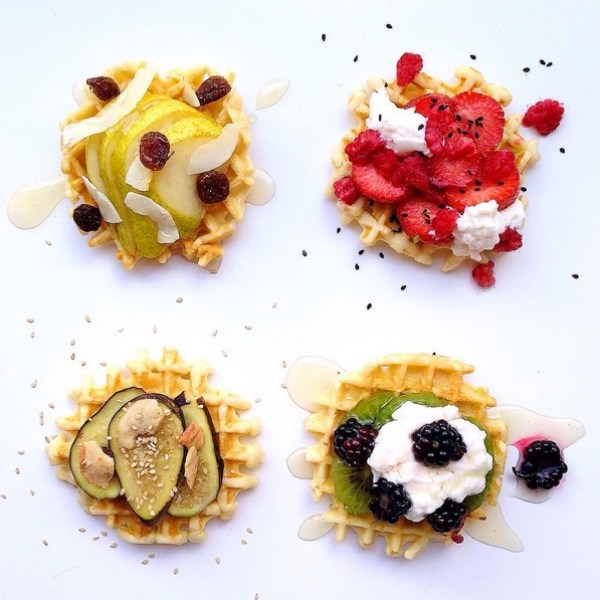 Tumblr has also been a major force in flat lay’s genesis, beginning with the Tumblr account Things Organized Neatly, whose name warrants no further explanation. Also originating on Tumblr is The Burning House, which asks “If your house was burning, what would you take with you?” The project (now available as a book) is a fascinating examination of the things we carry and why. 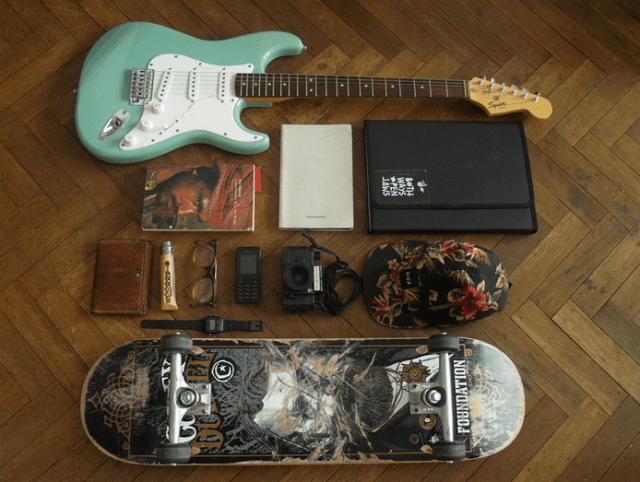 A submission to The Burning House displays the items that mean the most.

Flat Lay is an ode to things — food, clothes, books, electronics. But in this ode is reflected the particular incongruence of this century. At a time when consumer choices mark known moral dilemmas— between having and helping or spending and saving, we still adore stuff. Some are looking at flat lay with a new, darker perspective, like Gregg Segal’s 7 Days of Garbage project, which shows people lying in a week’s worth of their own trash. These startling photographs are a reminder that our stuff has consequences that reach far beyond the confines of what we carry it in. 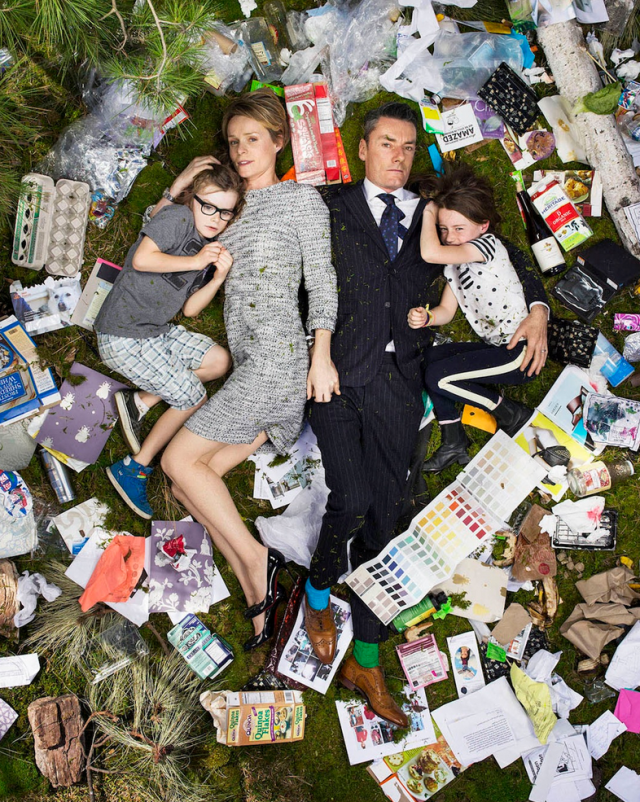 An unsettling photo from Gregg Segal’s 7 Days of Garbage series exposes the dark side of flat lay.

This article was originally published on Shutterstock.

SCORE NYC is a volunteer team of experienced business mentors dedicated to providing insights and knowledge to small business owners and those wishing to start a business with. Our 70+ mentors represent a multitude of industries and business expertise. They have all enjoyed success in their careers and are committed to giving you the support, encouragement and tools needed to build and sustain...